John Martin grew up in London. He worked as a Wireless Operator for the Royal Air Force. After being shot down over Berlin, he was captured as a prisoner of war.

Born in Chesterfield in 1925, Bill’s father was a ‘jack of all trades’ labourer and within 2years the
family had moved from the north down to the south coast of England. Bill attended a school in
Kingston around 4miles outside of Bournemouth and left school aged 14yrs commenced an
apprenticeship in the Osram GEC lamp factory in Hammersmith, London.

“We had to wear a white flash in our forage cap which signified that we were aircrew cadets. I
really felt that I was better cut out to be an air gunner rather than any of the other aircrew
tasks, like navigator, bomb-aimer, wireless operator, or pilot and whilst it is all a bit hazy now, I
was posted to the Isle of Man for training.”

Bill knew that he wanted to become a member of aircrew in the RAF and as soon as he was
18yrs old in 1943, he volunteered for the RAF, rather than waiting to be conscripted.

He was accepted into the RAF but made to wait for eight months before being called up for Basic
training which took place in RAF Bridgenorth in 1944 and he was accepted for aircrew training,

“I flew in Vickers Wellingtons as the tail-end Charlie (i.e., rear-gunner). These were all training or
fighter cooperation flights, I can recall us towing Horsa gliders in the Wimpy (the nickname for
the Wellington) and when we came back in over the airfield after earlier having released the
glider, the pilot would shout over the intercom ‘Now!’ and my task was to pull a lever to release
the tow rope so that it would drop neatly onto the airfield for collection on the ground.”

The Isle of Man contained two airfields, RAF Jurby, and the smaller RAF Andreas. By the time
that Bill arrived on the island towards the end of the War the Empire Air Training Schools which
had trained many thousands of aircrew for the RAF were being rapidly closed in countries like
Canada, South Africa, Rhodesia and the USA and far more aircrew training was beginning to
take place in the UK, with the Isle of Man being a key these location. Also, by this point, there
were a great many more trained aircrew available than were needed for operational squadrons.
Bill then undertook training and graduated as a qualified Air Gunner and appears to have
remained on the island for a while.

“We also did quite a lot of fighter cooperation exercises with Spitfires. Instead of ammunition we
would film the dummy attacks made on our aircraft by the Spitfires and I can vividly remember
looking out from my rear turret and seeing a Spitfire flying closely alongside us and then
speeding away, as of course they were a lot faster than us.” 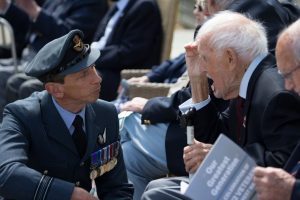 Some years ago, Bill and his wife Jean went back to the Isle of Man ‘to recapture my youth. The
couple got into a conversation with one of the locals who put them in touch with another local
who as a twelve-year-old boy shortly after the War went onto the airfields to collect bombing
markers and spent ammunition cases which had been expended by aircrew like Bill during the
War.

Bill is today unsure of the other postings he received but finished his RAF service in 1947 at RAF
Hurn in Dorset, not far from his home near Bournemouth.

Bill continued in aviation for a while as he became a first a charge-hand and then a foreman in
the Airspeed factory in Christchurch. Airspeed had built the Oxford in great numbers which was
one the aircrew training aircraft in which Bill had flown and the Horsa glider mentioned above.
By the time that Bill was employed by Airspeed, the factory was building Mosquitos, Seafires
and one of the first post-war civilian airliners, the Airspeed Ambassador.

Bill then decided to become a television engineer in the area working in ‘Good Listening’ factory
and also their shop in Southampton. A keen amateur Radio Ham, Bill connected with similar
buffs across the world for many years.
Bill and Jean moved from Bournemouth to Cwmtwrch near Ystradgynlais in the late 1980s, very
much enjoying their time there but the call of living once again near the coast became too
strong to ignore and they moved to Aberporth in 1997 where they continue to live today.